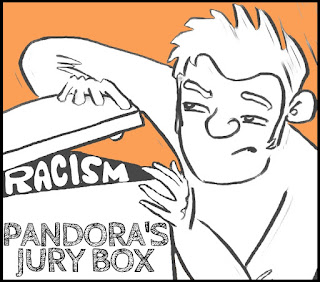 By a vote of 2 to 1, the Sixth Circuit refused this week, in United States v. Robinson, to grant a new trial based on evidence of racial bias infecting a jury.

The case
The three defendants were convicted at trial of running a pay-to-play scheme in a southern Ohio school district. All three defendants are black; the jury had only two black members.

One defense attorney felt the two black jurors looked uncomfortable during the verdict and jury polling. So after the trial, he hired a private investigator to interview the jurors (in violation of court rules and the court's instruction not to contact them).

The two jurors said that they were initially unconvinced of the defendants’ guilt. But then this happened (as summarized in Judge Donald's dissent):

The white jury foreperson accused the two black members of the jury of deliberately trying to hang the jury because of their shared race with the Defendants, raising the suggestion that the two jurors were protecting Defendants because “maybe [they] felt [they] owed something to [their] black brothers.” The foreperson also stated, “I find it strange that the colored women are the only two that can’t see” the defendants’ guilt. These comments escalated the tension in the jury room to the point that the marshal’s intervention was required.

The defendants moved for a new trial before sentencing. The district court denied the motion based in large part on Fed. R. Evid. 606(b)’s admonition against using juror testimony to impeach a verdict.

On appeal, the defendants argued that Pena-Rodriguez v. Colorado, 137 S. Ct.855 (2017), decided during pendency of the appeals, allowed impeachment of the verdict based on the foreperson’s racist remarks.

The majority decision
Judge Rogers, writing for the majority, distinguished Pena-Rodriguez on two grounds:
The defendants also challenged the district court’s three Allen charges. Particularly, they objected to the court’s remark, “I would encourage you to resolve the conspiracy issue because ultimately all these issues have to be resolved” (emphasis added). They argued this last part was overly coercive in that it failed to inform the jury of its right not to reach a unanimous verdict. But the majority decided that the court’s instruction was reasonable given the jurors’ questions, and that any problem was cured by the court’s later issuance of two full pattern Allen charges.

The dissent
Judge Donald issued a strong dissent taking aim at the majority’s efforts to distinguish Pena-Rodriguez and tracing the history of racial bias in jury issues, ending with this conclusion:

The history of racial bias in the courtroom is not only a stain on our shared past; its corrosive effects persist to this day. The enduring shadow of bias also dims public confidence in the fairness of the courts. The majority’s decision represents a step backwards from the strides we have made towards eradicating this disgraceful legacy from our criminal justice system. For the reasons set forth above, I differ with the majority with regard to the issues of racial animus within the jury and to the Allen charges, which, operating in a mutually reinforcing manner, exerted pressure on the two black jurors who were not prepared to vote for a guilty verdict. In combination with the racial animus contained in the jury foreperson’s remarks, these circumstances raise serious doubts about the fairness and impartiality of the jury’s decision.

Posted by Benton Martin, E.D. Mich. at October 01, 2017
Email ThisBlogThis!Share to TwitterShare to FacebookShare to Pinterest