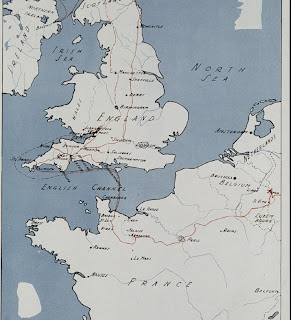 (Pic in celebration of the Emerald Isle.)
Well, following up on my post of March 12, the Second Circuit (Judges Pooler, Hall, and Trager, of the Eastern District of New York) has held that a mandatory minimum sentence under 18 U.S.C. § 924(c)(1)(A) is inapplicable when a defendant is subject to a longer mandatory minimum sentence for a drug-trafficking offense that is part of the same criminal transaction as the firearm offense. United States v. Williams, No. 07–2436 (2d Cir. Mar. 5, 2009). The court had previously held in United States v. Whitley, 529 F.3d 150 (2d Cir. 2008), that the "except clause" of § 924(c) means that the minimum sentences do not apply when a greater sentence is otherwise provided by another provision of law. That case addressed the Armed Career Criminal Act (ACCA). The Williams court simply extended this holding to cover non-firearms minimum sentences and sentences provided by the predicate offense (i.e. a mandatory minimum for a drug-trafficking offense).
The Williams court cites United States v. Rodriquez, 128 S. Ct. 1738, 1788–89 (2008), to support the need to faithfully read statutory text and refrain from inserting language into statutes. The court also cites United States v. Jolivette, 257 F.3d 581, 587 (6th Cir. 2001). The court notes that the 6th Circuit has cited with approval cases that have read the "except clause" as having a firearms limitation. It has cited cases that at least leave open the option that other firearms provisions could lead to a non-consecutive sentence under 924(c) (e.g., ACCA).
The Williams court points out that it is not unbridling the "except clause" to let it run wild. The court’s holding requires that the firearm was possessed in relation to the predicate offense—that the offenses arise from the same criminal transaction. The court also notes that the general rule is that 924(c) penalties are cumulative and that the "except clause" is just that: an exception.
The court made an interesting observation in a footnote. Case law does not point to any statutory provisions currently in force that could increase a sentence for a violation of § 924(c) that is not codified in that section. So really, the "except clause," as read by some courts, would allow for a greater minimum sentence in the event Congress enacts one in the future in some other section of the Code. They read it, essentially, as a hypothetical given the current state of the law.
What all this means for us. . . .
Well, first, seems to mean there’s a good cert. issue out there. But I think it also means we may actually have a little ground to challenge consecutive 924(c) sentences. As the Williams court points out, the Jolivette court cited United States v. Alaniz, 235 F.3d 386 (8th Cir. 2000), with approval. In Alaniz, the Eight Circuit concluded that the "except clause" refers only to firearm-related conduct and would not apply to a drug-trafficking sentencing provision. The Jolivette court described this reasoning as "entirely correct." So, we might be able to argue that ACCA and 924(c) sentences should not be consecutive (as in Whitley). There’s bad language in Jolivette, but that case’s support of Alaniz is helpful. The bad language is dicta. ACCA was not the issue in Jolivette. (Nor, for that matter, was a mandatory minimum drug-trafficking sentence. . . . ) Maybe, with such an argument and the help of Whitley and Williams, cases like Guthrie, discussed below, could come out even better. See United States v. Guthrie, Nos. 07–6215/07–6286 (6th Cir. Mar. 2, 2009). Just a thought . . . I could not find a case out of the Sixth Circuit directly refuting this argument, but that does not mean it is not out there.
Posted by Clare Freeman, RWS, WD Mich at March 17, 2009
Email ThisBlogThis!Share to TwitterShare to FacebookShare to Pinterest

Claire, you seem to understand this U.S. v Whitley case. I wish you would respond to my question -does this mean that in a case of bank robbery involving brandishing a weapon the sentence for the two offenses sould run concurrently - not consecutively?

I want to know the same thing as Anonymous. Does this mean that the sentences should run concurrently and not consecutively?