When Are We Burros? IAC Claims and Petitions for Cert... 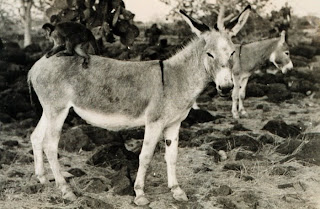 In United States v. Nichols, No. 05–6452 (6th Cir. Apr. 29, 2009), the Circuit en banc considered whether it is ineffective assistance of counsel to fail to preserve a "future change in the law" argument, one hoping that the Supreme Court will strike down existing law while a defendant’s case is still pending on direct appeal. The Court found that the petitioner couldn’t prevail on any IAC claim, so it avoided the broad constitutional question.
The petitioner and a co-defendant were sentenced in October 2002. The Apprendi opinion was out there, but otherwise, it was a pre-Blakely and Booker world. The petitioner got 405 months. Petitioner appealed. The panel affirmed. One day before the expiration of time to file for rehearing en banc, Blakely came down. Counsel didn’t ask for rehearing. Counsel did not petition for certiorari. The co-defendant’s counsel did petition for certiorari. Booker came down and the co-defendant got relief. Nine months were eventually knocked off co-defendant’s sentence—he got 396 months when resentenced.
The petitioner filed a pro se motion under 28 U.S.C. § 2255, claiming ineffective assistance of counsel. Petitioner claimed, among other things, that counsel had been ineffective for failing to raise an Apprendi argument or a Blakely argument later. The district court denied the motion. The petitioner got a certificate of appealability on the issue of whether counsel was ineffective when they failed to raise the issue of the petitioner’s sentence being enhanced based on facts not proved to the jury beyond a reasonable doubt. The panel hearing the appeal ruled for the petitioner. The government moved for rehearing en banc. The Court granted the motion. For the rehearing, the issue was a bit different: the petitioner argued that by failing to raise the Apprendi argument at sentencing, on direct appeal, and in a petition for certiorari, his counsel was ineffective.
Essentially, the Court concluded that the petitioner could not "link the two pieces of the ineffective-assistance standard—deficient performance and prejudice—on the same side of the demarcation: he cannot show prejudice at any point at which he had a right to counsel, and he cannot show a right to counsel (and, hence, deficient performance) at any point at which he could show prejudice." Basically, the Constitution does not entitle a defendant to the assistance of counsel for a discretionary appeal—like a petition for certiorari. So, the failure to file for such review cannot amount to constitutionally ineffective assistance.
The petitioner claimed prejudice because he was denied the benefit of Booker’s change in
the law—a resentencing under an advisory Guidelines scheme—which was a benefit he would have received had he petitioned for certiorari. Had he petitioned, his conviction would not have become final before the Supreme Court decided Booker. The Court found that the petitioner could show prejudice on this claim, so the question became that of whether his counsel’s failure to petition for certiorari amounted to constitutionally deficient performance.
The Court said no. The Constitution does not entitle a defendant to the assistance of counsel for the filing of a petition for certiorari. Counsel’s failure to file a petition does not amount to constitutionally ineffective assistance.
The Court also addressed the petitioner’s assertions based on Sixth Circuit Rules 101(a) and (g), which impose certain obligations on counsel (e.g., trial counsel must continue representation on appeal until they are specifically relieved by the Court and losing appellate counsel must petition for certiorari under certain circumstances). The petitioner’s claims for relief came under 28 U.S.C. § 2255, however, which calls for allegations of an error of constitutional magnitude, a sentence imposed outside the statutory limits, or an error of fact or law that was so fundamental as to render the proceedings invalid. The petitioner claimed a constitutional error. Absent a constitutional right, he had no claim. The procedural rules alone do not create constitutional rights or impose constitutional duties.
In terms of counsel’s failure to petition for rehearing en banc, the Court did not decide the issue because, "even if we were to assume that [petitioner’s] original appellate counsel performed deficiently by failing to move this court for rehearing . . . [petitioner] cannot show any resulting prejudice." At the time, the law was that the Federal Sentencing Guidelines did not violate the Sixth Amendment.
In short, the petitioner did not show that his counsel was constitutionally ineffective for failing to anticipate the changes that did come about in the law—counsel was not ineffective for failing to raise an Apprendi-based challenge at sentencing or on direct appeal, for failing to move the appellate court for reconsideration on a Blakely-based claim in post-appellate proceedings, or for failing to petition the High Court for certiorari under Booker.
Judge Moore dissented. She thought that the majority’s focus on the petitioner’s original counsel’s failure to petition for certiorari ignored the fact that there were actually several routes by which the petitioner could have had an appeal pending at the necessary time to obtain relief. Had counsel raised the Sixth Amendment argument at sentencing or on direct appeal, the petitioner likely would have known to raise the argument at a later date.
Judge Moore concludes that Apprendi and Blakely cast the constitutionality of the Federal Sentencing Guidelines into serious doubt, and that the petitioner’s sentence presented circumstances that were called into question by Apprendi and Blakely. Petitioner’s original counsel was therefore constitutionally ineffective for failing to preserve a Sixth Amendment challenge to the petitioner’s sentence.
Posted by Clare Freeman, RWS, WD Mich at April 30, 2009
Email ThisBlogThis!Share to TwitterShare to FacebookShare to Pinterest