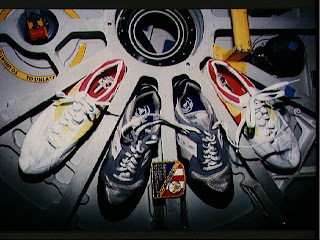 I apologize for the break in posting summaries. Things got really hectic. But here we go again. Thanks to the AFPDs for their summaries!

Defendant apprehended on a state warrant; law enforcement officers then got permission from the female tenant of the apartment where defendant was found to search the premises. They discovered a closed shoebox, which was labeled for a pair of men’s basketball shoes. The shoebox was surrounded and partially covered by men’s clothing, and the box lay in the corner of a closet in a spare bedroom that contained additional men’s clothing. Without a search warrant and without making further inquiry, the officers opened the shoebox. The shoebox contained a handgun and ammunition that belonged to defendant.

Upon being charged with being a felon in possession of a firearm and ammunition, the defendant moved to suppress the contents of the shoebox. The district court, after conducting an evidentiary hearing, granted the defendant's motion and suppressed evidence of the gun and the ammunition. The panel affirmed the judgment of the district court.

The circuit court reversed and remanded the case for re-sentencing, finding insufficient evidence as to a conspiracy count.

Sufficiency of the Evidence

Defendant argued that the evidence was insufficient to convict him of the conspiracy count. To sustain a conviction for drug conspiracy under § 846, the government must prove: 1) an agreement to violate drug laws; 2) knowledge of and intent to join the conspiracy; and 3) participation in the conspiracy.

Defendant’s main contention on appeal was that there was not sufficient evidence that he and any other person had agreed to distribute drugs. He emphasized that the other individual at issue was acting as a government informant during the controlled buy and thus could not be party to a conspiracy, another individual engaged in only one isolated drug transaction with the defendant, and there was not enough evidence from which the jury could infer that the defendant and a third individual conspired.

Court had to determine whether a rational trier of fact could find that the defendant had knowledge of the conspiracy itself, and purposefully joined it. The one individual's

The informant described a chain-distribution scheme by testifying that he observed an individual buy drugs from the defendant, which the first individual in turn instructed the informant and another to distribute, and then remit payment to the first individual. But there was no evidence that the defendant had knowledge of the conspiracy itself, and purposefully joined the conspiracy. Although one of the individuals lived with the defendant, and was found with drug paraphernalia in his pockets, and police confiscated drugs from common areas of the house the two shared, the court could not infer an agreement between the two men from those facts.

The evidence was considerably less than what the court has held to be sufficient in other cases.

The defendant--appellant, Harry Ray Davis, Jr., appealed his sentence for being a felon in possession of firearms. He argued that the district court erred in applying Guideline § 2K2.1(b)(6) (used or possessed any firearm or ammunition in connection with another felony). Court affirmed the sentence.

The language of the guideline was broad enough to cover the transactions involved here and warranted the application of the 4-level enhancement.

Defendant pleaded guilty to six counts of shipping, receiving, and possessing child pornography in violation of 18 U.S.C. § 2252A(a)(1), (2), and (5). The district court sentenced him to 235 months of imprisonment, based in part on a sentencing enhancement which increased his sentence based on the number of images. Defendant appealed, arguing that his sentence was procedurally and substantively unreasonable, and that the enhancement itself is unconstitutional. Court affirmed.

The court found the sentence to be constitutionally, procedurally, and substantively reasonable.

Defendant--appellant alleged the district court erred in: 1) issuing a jury instruction on a Pinkerton theory of liability, resulting in confusion on the part of the jurors; 2) denying his Rule 29 motion for acquittal based on insufficient evidence to support his conviction on counts 3 and 6; and 3) denying his request for a two-offense-level reduction based on the fact that he played a minor role in the offense. Because the district court’s jury instructions adequately informed the jury of the law, there was sufficient evidence to support conviction on each count, and the district court did not abuse its discretion in denying a reduction, the court affirmed.

Found the sentence to be procedurally and substantively reasonable despite the defendant’s rather horrendous upbringing.

Defendant pleaded guilty to unlawful reentry after deportation after an aggravated felony in violation of 8 U.S.C. § 1326. Guideline range was 77 to 96 months, and the district court sentenced him to 96 months of imprisonment.

Defendant argued that he was entitled to a variance because the Eastern District of Michigan does not offer a "fast-track" program and asserted that his sentence violated the Eighth Amendment. The court found that precedent rejects the first contention, and the Eighth Amendment argument failed because the defendant did not argue, and he could not show, that his sentence was grossly disproportionate to his offense.

The defendant had an extensive history of crimes and re-entries, which the court found outweighed any arguments he made regarding a downward variance for lack of "fast track" disposition and severity of the sentence under the Eighth Amendment.

Respondent-appellant Warden Kenneth Romanowski appealed the district court’s decision to grant the petitioner-appellee's conditional habeas relief. The district court found that the petitioner was entitled to habeas relief because his trial counsel rendered him ineffective assistance in violation of the Sixth Amendment when counsel failed to call a witness after promising her to the jury, or alternatively, when he failed to properly investigate the case.

Court reversed in part and affirmed in part the district court’s grant of habeas relief.