Appellate Waivers and the Elephant in the Room 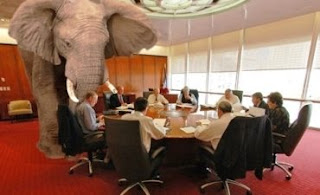 This site does not often comment on unpublished cases, but, from time to time, an unpublished decision will provide guidance, and, in this case, a warning, for appellate counsel.  This is just such a case.

In United States v. Mason, the defendant, Mason, entered into a written plea agreement with the United States wherein the parties stipulated to a Guidelines range of 145-175 months.  In exchange, Mason agreed to waive his right to appeal his sentence so long as it did not exceed 175 months.

Prior to his sentencing, Mason raised numerous objections to this Guidelines calculations, which the district court subsequently denied.  This did not work to Mason's detriment, however, since the district court imposed a below-Guidelines sentence of 125 months.  Dissatisfied with this result, Mason appealed.

Citing the waiver in Mason's plea agreement, the Court promptly dismissed his appeal.  In its unpublished decision, the Court noted its annoyance with one critical fact: Mason failed to raise the appellate waiver as an issue.  "An unsuspecting reader," the Court noted, could waste his or her time reading the briefs only the discover that the appellant had waived all of the issues raised.  Judge Kethledge noted he was the unsuspecting reader, that Mason failed to respond to the issue after the United State raised it in its response brief, and that, were it a civil case, the appellant could face sanctions.  Ouch!

This author detests appellate waivers in plea agreements, especially the all to frequent language being employed by the United States where the parties try to play a guessing game about the defendant's Guidelines range.  Nevertheless, it is best not to ignore the elephant in the room on appeal.


Posted by Ben Allen at October 07, 2018
Email ThisBlogThis!Share to TwitterShare to FacebookShare to Pinterest