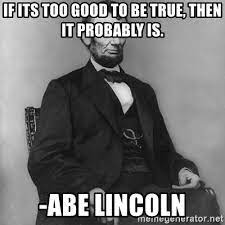 Perhaps we should not trust all the ads we see on the internet. A Romanian organization known as the Alexandria Online Auction Fraud Network ("AOAF Network") used fraudulent online advertisements on websites such as eBay, Amazon, Craigslist, and others, to lure unwitting purchasers in the United States to "purchase" high value items that did not exist. To launder its ill-gotten gains, the AOAF Network utilized individuals in the United States, such as Dimitrious Brown, to launder the money by converting the payments into Bitcoin currency, which they then transferred to Romania. Foreign Bitcoin exchange businesses, including RG Coins, a company based in Bulgaria and operated by Rossen Iossifov, subsequently transferred the Bitcoin balances to cash on behalf of the AOAF Network members. The purchasers never received the items they believed they purchased.

A federal grand jury subsequently indicted 20 defendants involved in the scheme, including Brown and Iossifov. The Government charged Brown with one count of conspiring to engage in racketeering in violation of RICO. Brown ultimately pleaded guilty, and the District Court sentenced him to 78 months imprisonment.

The Government similarly charged Iossifov in engaging in a RICO conspiracy. Iossifov, who assisted the conspiracy from Bulgaria, was eventually arrested and extradited to the United States. In addition, it charged him with one count of conspiring to commit money laundering in violation of 18 U.S.C. § 1956(h). A jury subsequently convicted Iossifov on both counts.

Iossifov challenged his conviction, and both Iossifov and Brown challenged their sentences on appeal. The Sixth Circuit eventually consolidated their appeals, and, in a published opinion, affirmed Iossifov's conviction and the sentences for both defendants.

On appeal, Iossifov challenged the District Court's order denying the motion to dismiss the superseding indictment for improper venue, impermissible extraterritorial application of 18 U.S.C. § 1962(d) and 18 U.S.C. § 1956(h), and a violation of due process. The Court rejected Iossifov's venue challenge, holding the Government produced substantial evidence demonstrating that acts in furtherance of the RICO conspiracy occurred in the Eastern District of Kentucky.

Iossifov also argued the District Court violated his due process rights by exercising jurisdiction over him. The Court disagreed with this argument as well. Holding 18 U.S.C. § 1956 demonstrated Congress' intent that it apply extraterritorially, and that the District Court correctly found a nexus between Iossifov and the United States, the Court held the District Court did not error in dismissing his motion to dismiss.

The Court next addressed Iossifov's challenge to the sufficiency of the evidence against him. Iossifov argued the Government failed to prove he knew the Bitcoin he exchanged came from fraudulent activities. The Court disagreed, finding the Government offered sufficient evidence to convict him on both counts.

Iossifov also raised several evidentiary objections on appeal, none of which convinced the Court. First, he argued the District Court erroneously admitted certain statements under the co-conspirator exception to the hearsay rule because the declarant did not make them in furtherance of the conspiracy. The Court disagreed, holding that the declarant's statements were more than just "casual conversation," and that he made them to further the conspiracy's objectives.

Iossifov also asserted the District Court erred in admitting evidence he participated in a separate internet fraud network, asserting it was improper "other act" evidence under FRE 404(a). Again, the Court disagreed. Citing FRE 404(b)(2), the Court held the District Court correctly found it was evidence proving Iossifov's knowledge of the conspiracy at issue and that any prejudice from the evidence did not substantially outweigh its probative value under FRE 403.

After his trial, Iossifov moved for a new trial based on evidence one of the witnesses in his case made misrepresentations in preparation for his sentencing hearing. The Court affirmed the denial of this motion, holding that, in the end, regardless of how it may have undermined the witnesses's credibility, it would not have resulted in an acquittal.

The Court rejected both arguments. It found the District Court properly found that Iossifov lied during his testimony when he testified his company did not have a specific email account linked to emails with the AOAF Network co-conspirators. In addition, it held the District Court properly calculated the amount of money laundered by relying upon relevant conduct and the Secret Service's calculation of the funds involved in various transactions.

Turning to Brown's appeal, the Court considered the two objections he raised to his sentence. First, Brown asserted the District Court erred in imposing a two-level enhancement for obstruction of justice for sending false tax filings to the presiding judge, lead prosecutor, and the Clerk of the Court, claiming they owed him millions of dollars, arguing such conduct did not meet the requirements of U.S.S.G. § 3C1.1. The Court rejected this argument, noting the list of conduct governed by U.S.S.G. § 3C1.1 is not exhaustive, and that the District Court did not have to find that his conduct affected the proceedings in any way.

With respect to Brown's amount of loss argument under U.S.S.G. § 2B1.1(b)(1)(I), the Court held the District Court properly calculated the amount of loss. Rejecting Brown's assertion he was only responsible for the proceeds he laundered ($664,000), it held the District Court properly attributed $2.74 million laundered by him and his co-defendants in the United States into its loss calculation.

Posted by Ben Allen at August 25, 2022
Email ThisBlogThis!Share to TwitterShare to FacebookShare to Pinterest