There Is A Zoo in Central Park 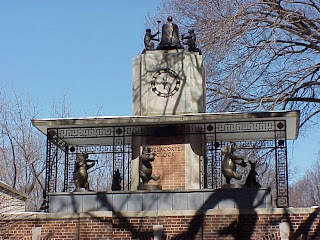 Judge Moore and Judge Kethledge fought both a legal battle and a snark battle in United States v. Beauchamp, published October 25. Judge Moore, joined by District Judge Marbley, found that Beauchamp was unconstitutionally searched and seized when police stopped him for: (1) walking on the street with another person; (2) in a high crime area; (3) at 2:30 in the morning; and (4) hurriedly walking away from a police officer while avoiding eye contact.

Judge Kethledge disagreed and, in addition to finding that reasonable suspicion existed, also accused the majority of applying the incorrect standard of review and of appellate factfinding. Judge Kethledge wrote in dissent, "Appellate factfinding is a rare and exotic animal, and often seems out of place too. Its appearance warrants explanation in the manner that, say, a rhinoceros in Central Park does."

As with many fact-intensive Fourth Amendment stops, reasonable minds could disagree as to the degree of suspicion Beauchamp aroused. But the victor of the snark battle can only be Judge Moore. In a withering footnote, Judge Moore pointed out, correctly, that there is a zoo in Central Park. While a rhino is not part of the Zoo's usual repertoire, they do get visiting exhibits from time to time and, at any rate, a rhino in Central Park could really easily be explained by the zoo.

While such snark battles are fun to blog about, they are indicative of a very real and serious problem with our Circuit: an ideological breach so vast that Democratic and Republican appointees no longer regularly lunch together at the University Club in Cincinnati. Both the substance and style of this decision demonstrate why Adam Liptak of the New York Times called the Sixth Circuit "surely the most dysfunctional federal appeals court in the nation."
Posted by Ryan Harvey at October 27, 2011
Email ThisBlogThis!Share to TwitterShare to FacebookShare to Pinterest

In my youth, old man Jeffrey, observed with a sigh/ I spent lots of time in that zoo./ In those days, in the zoo, there were many wild beasts:/ Rhinos, yes sir, but nary a gnu.

With apologies to Lewis Carroll.

My favorite part of this opinion is the liberal use of the term "butt cheeks." Here I've been using "buttocks" to avoid what I considered to be the more colloquial "butt cheeks" in court documents, but I'm going to consider this carte blanche.